The Splicer model Toasty fancies himself a ladies man, and much like Baby Jane, is concerned about his horrible disfigurement. His dialogue often alludes to him either murdering or raping a woman, then denying it. He also appears to have low self-esteem and no luck with the female denizens of Rapture.

In BioShock 2, the Toasty model reveals the progression of many years of ADAM abuse and the resulting deformities. Concept art shows the model with many tumor like growths on his head, hands and feet to the point that he is barely recognizable as human. Toasty's dialogue suggests that he's found a girl and wants a child; however, he seemed to be clueless as a father, even noting that he made the baby a cradle from a fish tank, so he and his wife can "see the baby all the time."

The following are phrases that Toasty says in BioShock. The name of the source audio file is listed when known.[Audio files needed]

If the Player Runs[]

If an accessory is pulled off Toasty with Telekinesis[]

The following are phrases that Toasty says in BioShock 2. The name of the source audio file is listed when known.[Audio files needed]

Picked Up with Telekinesis[]

Toasty's primary outfit is worn by a number of the Rapture Citizens seen on Market and High Street. The outfit is of course in pristine condition with no tears or stains.

Some of the Splicers trapped in Fontaine's Department Store wear a much more blood and grime soaked version of Toasty's outfit from the previous episode. Lonnie can also be seen wearing this outfit.

Toasty wears a versatile outfit suited to most jobs. He wears a double-breasted vest with a shawl collar over a loosened tie and dress shirt with a tear at the left shoulder. His slacks are torn below the left kneecap exposing his sock and garter. His face is badly disfigured due to the effects of Splicing and the Civil War. His left eye is bandaged and his right one is sunken in. His nose appears to be broken and his face and lower lip sag. Toasty can wear either a beige or grey flat cap, a brown fedora, or a pair of blind man's glasses as accessories.

Model 1: The primary model wears a white dress shirt, slate blue pinstripe pants, brown vest with similar buttons, and a black tie with thin red stripes. He has blood droplets all over his entire body and is bleeding from his bandage.

Model 2: This model wears a light blue dress shirt, cream colored pinstripe pants, eggshell colored vest with white buttons, and a black tie. He has a nasty gash over his exposed leg. His pants are stained around the crotch, his upper torso has blood splatter across it, and his bandage is very dirty.

Model 3: This model wears a burgundy dress shirt, navy blue pinstripe pants, green, diamond patterned vest with black buttons, and a red tie. He seems to be suffering from vitiligo.

Model 4: This model wears a white dress shirt, navy pants and matching vest with similar buttons, and a blue tie with thin white stripes. His suit appears to have been slightly soiled or bleached and his right eye has a seriously inflamed rash.

Character-Specific: Cohen's four disciples have unique models from those seen wandering around Rapture. They wear a white dress shirt, red pants, a red and orange diamond pattern vest with grey buttons, and a yellow tie. Aside from a few blood stains across the shirt, the outfit is spotless. The ensemble includes a rose in the lapel and a colorful bird mask.

In BioShock 2, he wears 3 layers of clothing that are visible - a long-sleeved undershirt, underpants, a collared shirt, and a vest & slacks. The fly on his pants is unzipped and he wears a pair of suspenders and a bandage around his head.

Model 1: The primary model has pale skin, black hair and black eyes. His undergarments are white, his shirt is greyish blue with wide pinstripes, and his vest is black. His pants have a black plaid pattern, and he wears a black & white wingtip shoe. The bandage on his head is relatively clean, as are the rest of his clothes.

Model 2: This model has dark skin, black hair and black eyes. He has a small mustache. His undergarments are a greyish brown, his shirt is white, and his vest & slacks are grey with wide pinstripes. He wears a grey & white wingtip shoe and the bandage on his head is somewhat dirty. There are dark veins along the side of his head and on his feet & hands. There is a dark stain around the crotch of his pants.

Model 3: This model has light skin, blond hair and black eyes. His face is covered in pimples. His undergarments are light brown, his shirt is white and brown and his vest & slacks are dark brown. He wears a black wingtip shoe and the bandage on his head is heavily soiled.

Model 4: This model has pale skin, red hair and bloodshot black eyes. His neck and part of his chin are covered in open red lesions. His hands and feet are dark purple as if they were necrotic. His undergarments are white, and his shirt is white with brown trim. His vest is light brown with a windowpane pattern, and his slacks are solid light brown. He wears a brown & white wingtip shoe and the bandage on his head is somewhat dirty. His clothes are filthy, with yellow and brown stains on the cuffs of his shirt and a dark stain around the crotch of his pants.

Model 5: This model appears in Persephone only, and is used for the male prisoners. It looks about the same as the primary model but it's dressed in prison stripes. 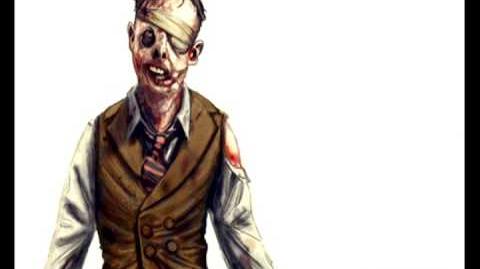 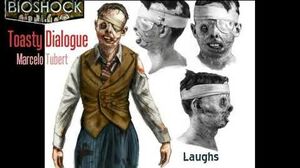 More dialogue from Toasty in BioShock. 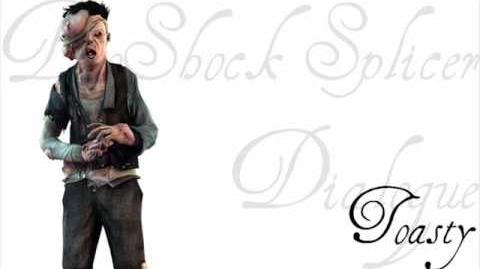 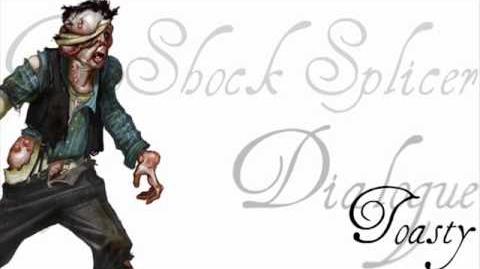 The original concept sketch for Toasty.

An alternate concept for Toasty.

Game render of Toasty as seen in BioShock.

Collected views of The Toasty model.

All renderings of Toasty seen in BioShock.

Another game render as seen in BioShock.

8 studies of the Toasty head model in Bioshock 2. 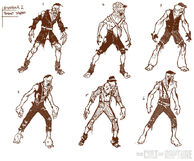 6 studies of the Toasty model in BioShock 2.

Close up on Toasty's face.

Toasty, under the effect of Winter Blast, seen in BioShock 2's Launch Trailer.