Tollevue is a mental hospital in New York City that has figured significantly into the plot of There's Something in the Sea. At the beginning of Phase Two, Mark Meltzer was temporarily forced to stay there after his daughter was kidnapped by the Big Sister. Later, in the course of his investigations to find his daughter, Mark discovered that RØd Killian Quain, an alias of Orrin Oscar Lutwidge, was being kept at Tollevue after Celeste Roget bribed local officials to ensure he never get out. Mark faked a mental illness to get back in and speak to Quain. During their stays at Tollevue both Mark and Quain were seen by Dr. Howard Lyman, who acted as their primary psychiatrist.

In January 1969, Lutwidge escaped from Tollevue, fatally wounding one orderly in the process. 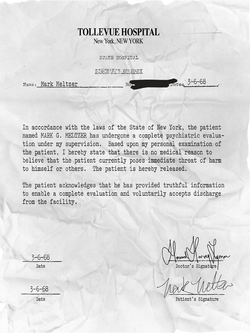 In accordance with the laws of the State of New York, the patient

tion under my supervision. Based upon my personal examination of

the patient, I hereby state that there is no medical reason to

believe that the patient currently poses immediate threat of harm

to himself or others. The patient is hereby released.

The patient acknowledges that he has provided truthful information

to enable a complete evaluation and voluntarily accepts discharge

MOST TEST ITEMS APPEAR TO HAVE BEEN ANSWERED TRUTHFULLY.

HOWEVER, INCONSISTENCY IN RESPONSE TO SEVERAL CATEGORIES

SUGGEST S THE PATIENT MAY HAVE MODULATED ANSWERS IN AN

THIS PATIENT APPEARS TO BE CURRENTLY DEPRESSED AND

ANXIOUS. HIS CONDITION MAY BE PARTIALLY CONDITIONAL DUE

TO ENVIRONMENTAL STRESSORS. HOWEVER NUMEROUS PATTERNS

DIAGNOSIS OF DEPRESSION AND / OR ACUTE ANXIETY. PATIENT

MAY BE PRONE TO BIZARRE DELUSIONS BUT MAY ATTEMPT MASK

OR DENY THESE BELIEFS.

DIAGNOSIS IS NOT CONCLUSIVE. EVEN IF THE PATIENT HAS NOT

HARM HIMSELF AND / OR OTHERS, FURTHER TREATMENT IS INDICATED.

PATIENT IS EXPECTED TO REMAIN RESISTANT TOWARD TREATMENT

AND MAY EXPRESS CRITICAL/REBELLIOUS ATTITUDES TOWARD

Mr. R. Killian Quain was transferred to the Secure Ward of Tollevue

It is our opinion that Mr. Quain suffers from a dangerous mental disorder

and requires treatment in a high-security psychiatric facility.

Assault, Aggravated Battery, Breaking and Entering and Criminal Threat in

relation to an incident involving one Lester Leland ("Lex") Harlan.

During Subsequent interviews with police and psychiatric evaluators, Quain

has confessed to numerous other crimes including various homicides which

to date have not been corroborated.

How crazy is this guy???

A full summary of Mr. Quain's personal and psychiatric history is attached.

Rod Killian Quain states he was born September 3, 1906 in the City of New

York. Details have not been substantiated as Quain appears to have no

Mr. Quain's account of his youth is garbled and incomplete. He has refused

to reveal anything except an early fascination with Lewis Carroll.

to make sure others (notably "the Frenchwoman") didn't find him first.

"Rapture," "Utropolis" and "Wonderland." His descriptions of this location

are riddled with obvious delusions.

Quain claims to have fallen in with a gang he calls "The Splicers." The

appears that this substance was injected. It is presumed the substance is a

hallucinogen or narcotic, though Quain associates it with certain unbeliev-

During his period in "Rapture" / "Wonderland" etc., Quain appears to have

been involved in some kind of gang warfare with rival factions of "Splicers."

He purports to have taken the lives of numerous individuals. Further

If his accounts are to be believed, Quain may be responsible for dozens of

Retrieved from "https://bioshock.fandom.com/wiki/Tollevue_Hospital?oldid=313834"
Community content is available under CC-BY-SA unless otherwise noted.