“Excuse me! Where am I?"
"Heaven, friend. Or as close as we'll see till Judgment Day.”
― Booker DeWitt and Male Pilgrim[src]

The Town Center of Columbia, also known as the Comstock Center, is the first district Booker DeWitt visits after his arrival to the floating city by use of the Pilgrim Rocket. From this point his mission starts: find Monument Tower and get the girl to wipe away his debt.

After activating the rocket in the lighthouse, Booker DeWitt is launched high into the air to Columbia, where the vehicle lands at the top of the Welcome Center.

The Welcome Center serves both as an entry point to the city for the pilgrims from the Earth below, but also as a temple to the followers of Comstock's faith. This place of worship is adorned with statues and stained-glass windows depicting the Prophet, the Lamb of Columbia, and the First Lady of Columbia, Lady Comstock. The Welcome Center's alcoves are filled with hundreds of lit prayer candles and offertory gifts (including a number of Silver Eagles). The floors on both the upper and lower levels are immersed in shallow, slowly flowing water. Visitors descend into the main chamber, where Columbian citizens pray and listen to the facility's overseer Preacher Witting. New citizens are required to be baptized before being allowed to enter further. Booker allows Witting to baptize him so that he may enter the city, but Witting submerges him too long, causing him to black out and awaken some time later in the Garden of New Eden.

The Garden of New Eden located outside the Welcome Center is another place of praying and serenity were the new pilgrims, after accepting baptism from Preacher Witting, arrive. Decorated with rose bushes, reflecting pools, and angel statuary, the garden is a beautiful, tranquil area and a popular spot for group prayer among the faithful. The courtyard is dominated by three impressive statues of Columbia's "Founding Fathers" George Washington, Benjamin Franklin, and Thomas Jefferson each holding their appointed symbol (a sword, a key, and a scroll) respectively representing strength, industry, and law. Not caring for the religious fervor, Booker heads out on in search of his target.

Booker emerges just as the floating structure of the Welcome Center is docking with its designated receiving point, New Eden Square. The square is a lively area which connects to many different shops and stores such as Hudson's Fine Clothing, Curt's Groceries & Meats, Chas. A. White Supply, a Grocery and many others. This place was specifically created to welcome the new inhabitants of Columbia and share with them their vision of "Heaven on Earth." At the center of the square is a monument of the Prophet, Father Comstock, branding a sword. When Booker arrives on July 6, 1912, the city is celebrating the annual Columbia Raffle and Fair, dedicated to its secession with the United States government. A few other marvels are unravel under Booker's eyes: the Sky-Lines transporting cargo across town, an Automated Stallion, a series of parade floats recounting the tale of Comstock and a barbershop quartet singing the "music of tomorrow" on a flying gondola. Eventually, he spots Monument Island, his destination, and receives a telegram from someone named "Lutece," warning him of events to come.

The direct route to the island is blocked, the area closed while fireworks are set up, so Booker detours through the Fairgrounds. In honor of the annual fair, the locale is celebrating the technological marvels Columbia has to offer such as the Sky-Lines, Easter & Sons Premium Automated Stallions, Voxophones, and even a Handyman. In addition to the fair food, high striker game, clown, and bluegrass band, several stands are set up to entertain the masses with Vigors. Most if not all of those creations are products of Fink Manufacturing, whose chief executive and owner Jeremiah Fink is hosting the Raffle this year and has spent a lot of money to advertise his products and offer free samples.

Other booths have shooting galleries with the Vox Populi as the targets. Up ahead, the gates to the Path of the Scroll and the Raffle are closed, all tickets sold out. Fortunately, a Possession hawker offers Booker a free sample, permitting him to takeover the admission machine, and advance. Before he can progress, a gentleman and a lady have him flip a coin and note the result on a board.

The Path of the Scroll leads directly to Raffle Square from which the celebrations can be heard: Jeremiah Fink is entertaining his public before the ceremony starts, and sings with them Goodnight Irene. Walking along the street, Booker passes a pair of policemen, one demonstrating the new Sky-Hook, and a truly peculiar sight as a statue seems to reshape itself before his eyes, from a man to a woman, dedicated to one R. Lutece, one of the creators of the floating city. Most disconcerting of all, Booker spies a poster noting that the "False Shepherd" of Columbia's identifying mark is exactly the same as the one on his right hand. Still, Booker has to pass through the park in order to reach Monument Island.

Proceeding onward, Booker enters Raffle Square within the Raffle Park. The crowd are blocking the other side of the park and, after being called out by one of the Raffle's staff, he enters into the lottery and picks up a baseball. The "lucky number" 77 on it wins him the raffle, earning the first prize: throwing the baseball at an interracial couple, revealing the annual raffle as nothing more than a public stoning. Before Booker can choose to throw the ball at the ensnared couple or the raffle's host, Jeremiah Fink, the authorities notice the brand on his hand. While The police attempt to maim Booker with a Sky-Hook, he manages to kill his malefactors with the tool and escape. However, the floating bridge to the gate of Monument Island flies away, forcing him to go back to the entrance of the square and fights reinforcements. Following signs, Booker takes the scenic route to Monument Island through Shady Lane.

Booker keeps dodging the attacks of the Columbian police and resupplies himself in the open stores around the street. However as he moves ahead, he is suddenly attacked by a Fireman, who drops the Vigor Devil's Kiss when defeated. Booker defeats a final round of policemen before getting a much deserved respite. Unfortunately, the gondola docking station to Monument Island at the end of Shady lane is already gone. The Blue Ribbon restaurant nearby is open, and backs up to a series of buildings leading towards the island. Booker now has no other choice but to cut through the rooftops of Comstock Center to reach his destination. 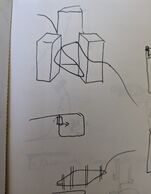 A very early sketch of the Sky-Lines for Town Center.

Early concept art for the "Columbia Entrance", further developed into the Town Center, made by Ben Lo.

Concept art for the Father Comstock statue, by Robb Waters. 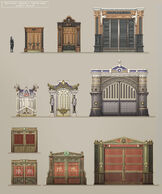 Various concepts for location specific doors, the top row being for the Town Center.

The Sword, the Key, and the Scroll.
Add an image to this gallery

This way to Paradise.

The first lady of Columbia.

The main chamber of the Welcome Center.

A view of the Welcome Center from the garden.

A hummingbird fluttering around the flower bushes.

A vision of a great city!

The Prophet Comstock leads his people out of the Sodom Below!

A Miracle Child is born, the future of the city is secured!

The bridge to the Fairgrounds.

Game booths at the Fairground.

The Luteces have Booker flip a coin.

Change before your eyes.

An old image of Comstock hidden among the skyscrapers.

"She flies with her own wings."
Add an image to this gallery

Retrieved from "https://bioshock.fandom.com/wiki/Town_Center?oldid=322330"
Community content is available under CC-BY-SA unless otherwise noted.