“Hello!"
"Hello, yourself. Keep your hands where I can see them.”
― Elizabeth and the shopkeeper[src]

Toy Soldiers is one of the shops found in Soldier's Field along Main Street as a outfitters for "Pint-Sized Patriots". It stands right next to the Carousel.

Zachary Hale Comstock knew that the best way to win people's allegiance was to indoctrinate them while they were young. It was with this idea that he built Soldier's Field: a carnival of delights in which Nationalism was spread through games, rides, and history lessons. The shops and services within Soldier's Field were intended to help spread this through their products; thus, Toy Soldiers was set up to sell pro-Founder toys, games, and gifts. 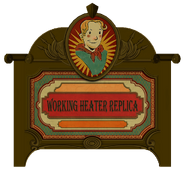 Booker DeWitt and Elizabeth arrive on Main Street and take some time to look around the different spots on the boardwalk. In Toy Soldiers, the store's biggest seller is the Songbird plush toy. Other things such as pennants from the Columbian Flag Company, model trains, pop guns, and a toy version of the Motorized Patriot are also popular. When Elizabeth walks near the larger plush toy of Songbird, it will activate, saying "The true patriot has nothing to fear from the Songbird".

Between the two statues of Duke and Dimwit on the far wall is a working replica of the Vox Heater. Reaching for it will prompt a choice to take it or leave it, while being warned by the guard. If Booker steals from the Cash Register or takes the Heater replica, not only will the shopkeeper turn hostile, but several police officers will also join in the fight.

To one side is a barred door powered by Shock Jockey. Its crystals have evaporated, requiring another recharging boost. After obtaining the Vigor in the Hall of Heroes, Booker and Elizabeth can return here to open the door. Inside some supplies and a Gear can be found.

An early version of the store from when it was called Geppetto's Village. 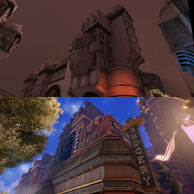 Early renderings of Geppetto's Village next to a Harper's Grocery. 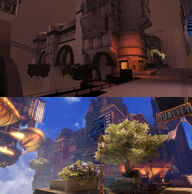 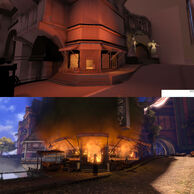 Note the attempt to censor the Geppetto's sign above the entrance.

An early version of Toy Soldiers.
Add an image to this gallery

The Heater replica guarded by a policeman.

Tin Soldiers sale advertisement.
Add an image to this gallery

Retrieved from "https://bioshock.fandom.com/wiki/Toy_Soldiers?oldid=326579"
Community content is available under CC-BY-SA unless otherwise noted.