During the Turf War game mode of BioShock 2 Multiplayer players are split into two teams: Team Atlas and Team Ryan, and are tasked with capturing and holding the control points present in the level. A player standing close to a neutral or enemy control point will gradually charge up a meter, which will earn the player's team the control point if it fills up completely. The team that managed to maintain control over the most points for the longest amount of time by the end of the match wins.

Fontaine's Home for the PoorEdit

An early design, with Buck Raleigh as scale. 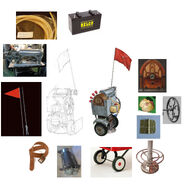 The near finished variant.

The finished concept for the Control Point.

Concept art and models of a Control Point.
Add an image to this gallery

Retrieved from "https://bioshock.fandom.com/wiki/Turf_War?oldid=305632"
Community content is available under CC-BY-SA unless otherwise noted.