“…In time of need”
― Advertisement[src]

Twilight Fields Funeral Homes is a mortuary located in the funeral services area of the Medical Pavilion. It features a front desk, two side viewing rooms, and a room used for the preparation of bodies, located in the back. The business itself was founded at the surface in 1937 and left it to settle in Rapture between 1946 and 1952.

This business is where Jack encounters his first door code, as well as finding the Security Expert Gene Tonic. The entrance is completely frozen over and can only be entered after acquiring the Incinerate! Plasmid from the nearby Eternal Flame. The reason for the ice is explained in the audio diary "Freezing Pipes".

The reception desk in Twilight Fields is by far the most welcoming in the Medical Pavilion. Comfortable couches, fancy curtains, and a warm light are a window to the past luxuries of Rapture. Only small amounts of damage are evident from the Civil War. As is demonstrated from the menu above the desk, Twilight Fields offered a wide variety of caskets and services. The cash register and body lying under the desk show signs of looting. Organ music can be heard playing from the reception area.

To the left and right of the reception desk are two viewing rooms for deceased loved ones. The eastern room contains a locked closet as well as a corpse ready for viewing. As Jack enters the room, a Thuggish Splicer throws the casket off its stand, spilling the corpse, and races towards him. Searching the corpse yields ten Dollars. Over behind the casket stand, Jack finds two bottles of Old Tom Whiskey, four Armor-Piercing Pistol Rounds, and eleven dollars. Upon taking the Anti-Armor Rounds, the locked closet slides open to reveal a Turret hacked by the Thuggish Splicer. Behind the Turret is a safe containing seventeen dollars, ten 00 Buck, and three Armor-Piercing Pistol Rounds.

The western viewing room has a locked closet with a code, as well as a Thuggish Splicer mourning over a coffin. Her sobs can be heard from the reception desk. When approached, she will attack. Surprisingly, the coffin is void of a corpse. Two Creme-Filled Cakes, a Music Box, and a Butterfly Mask lie within the coffin. The Music Box contains one dollar. Next to the coffin is a portrait of Winston Hoffner, an EVE Hypo and three dollars. Under the hypo is a piece of paper with 0451, the code to the locked closet, written on it. On the left bench, next to the casket, Jack can find one 00 Buck. Through the locked door, Jack finds a small shoe closet. Forty Auto Rounds, two 00 Buck, an EVE Hypo, and an Automatic Hack Tool can be found on the shoe rack.

Directly behind the reception desk is the sliding door to the preparation room. Flooding is evident in the adjacent hallway. This room is used to dress up the body for viewing. Several washing tables can be seen from the entrance. The medical cabinets and locked storage units are empty and unimportant. A single carton of Bandages can be found on the table to the left. As Jack approaches the flooded corridor, the body of a Dr. Grossman Splicer eerily drifts by. At the end of the hall, the shadow of a figure can be seen on the wall. When the shadow is approached, the lights flicker off, and a short time later, flicker on to reveal that the shadow has disappeared. One of the storage units can be seen closing as Jack rounds the corner. The Gene Tonic, Security Expert, as well as three Pistol Rounds, are found on a medical cabinet. If Jack searches the corpse on the washing table, he will find four dollars. After wading back through the hall, Jack will encounter the Dr. Grossman Splicer, who was casting the shadow earlier, hiding in one of the storage units. Looting his body yields two Armor-Piercing Pistol Rounds.

Twilight Fields is also an area in the multiplayer version of the Medical Pavilion. It is located in the southwest portion of the level, across from the reception area. It is made up of two medium sized rooms connected by an alcove containing stacked coffins and potted rose bushes.

The southernmost room contains a reception desk and two walls of stored cremation urns. A Little Sister Vent can be found in this room, as well as an ammunition pack on a bench behind the reception desk, and an EVE Hypo on the floor beside the desk. This room can be accessed through a door in the main reception area of the Medical Pavilion.

The second room of Twilight Fields contains a pile of bloody benches topped by an empty casket. It also contains a memorial for Winston Hoffner, with his large portrait with "SPLICER" written on it, hung over a closed casket. This room also holds an EVE Hypo and ammunition pack. This part of the funeral home can be accessed through a door in the western hallway or through a grated vent from an alcove of leaky pipes to the north.

Upon reaching Cohen's on High Street, private detective Booker DeWitt and the mysterious Elizabeth must acquire a special Invitation Mask to enter. They try their luck at the nearby jewelry store The Golden Rule and while DeWitt sneaks to the back, Elizabeth distracts the shopkeeper with a grift involving a stolen ring from a deceased woman at Twilight Fields Funeral Homes.

An early version of the funeral home. 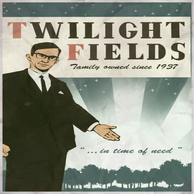 Advertisement for the funeral home.

The menu of funeral services.

The scrap of paper with the code to the locked door.

A Thuggish Splicer lies in wait. 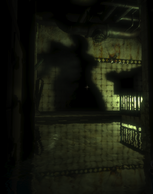 The doctor at work.

The preparation area with a Tonic nearby.
Add an image to this gallery

Retrieved from "https://bioshock.fandom.com/wiki/Twilight_Fields_Funeral_Homes?oldid=323594"
Community content is available under CC-BY-SA unless otherwise noted.