Ulrich Broder is a German reporter investigating the Vanishing during the course of the There's Something in the Sea storyline. He has only contacted Mark Meltzer twice in Phase Two, offering a translation of his article in a German paper about Brigid Tenenbaum's disappearance, and agreeing to cover the beach in Germany for the August 8th event. His article about Tenenbaum, whom the player meets during the events of BioShock, was useful to Mark when he was looking for a connection between the Vanishing and the recent kidnappings of many little girls, including his own daughter, Cindy. His link to Tenenbaum and the Vanished may prove to be a more significant point at a later date. Ulrich was one of the contacts of Mark's who offered to go to a beach during the August 8th event.

Later, when Mark journeyed to France to track down Celeste Roget, he tracked down Ulrich again after he had learned Celeste was supposedly kidnapped by the Red Pawn. During Mark's meet with the Pawn, Ulrich saved Mark by smashing his car into Lynch's, disorientating him long enough for Ulrich to drive Mark to safety. Judging from these events, Ulrich is willing to aid Mark however he can.

"Mr. Meltzer, I wrote the article you asked about, if you would like to see my notes on these cases, it can be arranged. They’re quite extensive. Most people here have no interest. I’ve been trying desperately to find somebody, anybody who will take this matter seriously. Please contact me as soon as you have a chance. Thank you."

"Mr. Meltzer, this is Ulrich Broder. I would like to confirm with you I'll be traveling to the region you asked about in your telegram. I am following on some leads about a young woman named Tenenbaum who was amongst the vanished, so it should not be so difficult for me to visit this beach the morning of August the eighth, but uh... our connection was very bad last night so if you would please wire me at the hotel with the coordinates again. Also, I'm not certain as to what you're expecting to find and how exactly this connects with the Vanishing..." 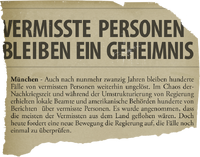 Munich - Even after twenty years, hundreds of cases involving missing persons remain unresolved. In the chaos of World War II and during the restructuring of government, local officials and American authorities received hundreds of reports on missing persons. It was thought that the missing persons had fled the country. Yet today, a new movement requests the government to review the cases once again. 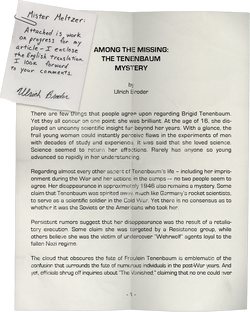 Mister Meltzer:
Attached is work
on progress for my
article - I enclose
the English translation.
I look forward
to your comments.

There are few things that people agree upon regarding Brigid Tenenbaum.
Yet they all concur on one point: she was brilliant. At the age of 16. she dis-
played an uncanny scientific insight far beyond her years. With a glance, the
frail young woman could instantly perceive flaws in the experiments of men
with decades of study and experience. It was said that she loved science.
Science seemed to return her affections. Rarely has anyone so young
advanced so rapidly in her understanding.

Regarding almost every other aspect of Tenenbaum's life - including her impris-
onment during the War and her actions in the camps — no two people seem to
agree Her disappearance in approximately 1946 also remains a mystery. Some
claim that Tenenbaum was spirited away much like Germany's rocket scientists,
to serve as a scientific soldier in the Cold War. Yet there is no consensus as to
whether it was the Soviets or the Americans who took her.

Persistent rumors suggest that her disappearance was the result of a retalia-
tory execution. Some claim she was targeted by a Resistance group, while
others believe she was the victim of undercover "Wehrwolf" agents loyal to the
fallen Nazi regime.

The cloud that obscures the fate of Fräulein Tenenbaum is emblematic of the
confusion that surrounds the fate of numerous individuals in the post-War years. And
yet, officials shrug off inquiries about "The Vanished," claiming that no one could ever
(end of text)

"This is the Trans-European News Broadcast, Ulrich Broder reporting from Strasbourg. Celebrated heiress, Celeste Roget, appears to have been the victim of a bizarre accident. Roget, the daughter of one of France's most noted architects, earned notoriety when she climbed the Himalayas in a doomed quest for her missing father. Seemingly crushed by the failure of her expedition, her behavior grew increasingly reclusive and eccentric. She kept dozens of villas throughout the countryside, which she used as a temporary hideaway. Last night, authorities say, a freak accident seemed to have caused the explosion of an oil burning furnace in her cottage near the French Border. As rescue workers dig through the wreckage, Celeste Roget remains missing, presumed dead. Now this—"

Retrieved from "https://bioshock.fandom.com/wiki/Ulrich_Broder?oldid=315142"
Community content is available under CC-BY-SA unless otherwise noted.