Transcript: That ghastly Fink fellow has been busy of late. He has sent his minions out to prowl the city, on the lookout for Tears wherever they might appear. They are armed with camera and Voxophone. One could only presume he is no longer content to steal patents from his own reality. No surprise, then, his scientific "breakthroughs." I imagine I could also appropriate parlor tricks like incinerating trees with the snap of my fingers. But the universe offers more delicious fish to fry.

Location: On a chest of drawers near the stairs leading to the upper floor. 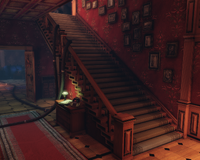 Retrieved from "https://bioshock.fandom.com/wiki/Unde_Vigores%3F?oldid=291214"
Community content is available under CC-BY-SA unless otherwise noted.