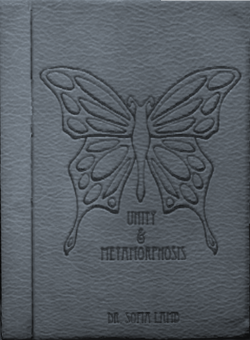 Unity & Metamorphosis is a book written by Sofia Lamb about her philosophy of creating paradise through unity and abandonment of the self. The book is imprinted with a large butterfly symbol and is treated as a religious document by members of the Rapture Family. It can be found at shrines of the cult and in the resting places of believers.

Many of Sofia Lamb's public address announcements are excerpts from her book.[1]

Retrieved from "https://bioshock.fandom.com/wiki/Unity_and_Metamorphosis?oldid=319545"
Community content is available under CC-BY-SA unless otherwise noted.