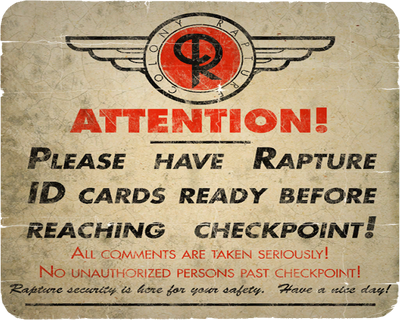 Mister Wiki Admin, Guardimuer, I would like to contribute more on this wiki now that I have matured more and I have gained more knowledge about the BioShock universe. I feel, however, hindered by my old idiotic blog posts and I humbly request that you can give me some satisfaction by helping me remove this useless forums off this productive and highly informative website.

Gearslover has already added a couple pictures of booker dewitt on the main page and has done quite a bit of editing on that page. I like the picture of bookers belongings when he opens the case better that was added by Jspyster1 here  awhile back. We alraedy have numerous close up of bookers face on the booker dewitt page and think it was better before the revert by gears

plus I think we should keep the previous text. I think gears should keep his past contrubutions to the page but we need to have a little diversity of posters posting pictures of booker and adding to his biography page. Thanks Evandalton089 (talk) 23:46, February 23, 2014 (UTC)

:I strongly disagree that we need need so m,any close up of  booker dewitts face (we already have quite a few, aka voxophone shot, main pic shot of him in museum, going up to columbia, revolutionary shot, and end game at the sea shot. i'm fine with these but think we should have the brief case shot to diversify a little bit) That pervious brief case shot has been there since october 2012 when the beaqts of america trailer was shown. We already have so many other close up of bookers face on the booker dewitt page. I also lik the previous posting better (as unown stated this as well). Why does gears have to have such a monopoly on the way booker dewitt looks on the page (he already posted two faceshots of booker within the artcile, have no problem with this as they been there awhile and would not edit them out, just dont think one person should have so much say on the whole booker article page)? He already posted two other pictures of booker dewitt on the main page. Let someone else have a viewpoint and keep the briefcase shot please. It has a cool detective "bring us the girl and wipe away the debt" vibe. It's been on the booker page for so long at this point I think it shoud stay (not to mention it sums up the very beginning part of the game really well.) Thanks. PS; sorry if I'm a little agressive, I might be new in posting here but I've been comign to this wikia since the debut 2010 trailer of Bioshock Infinite. Evandalton089 (talk) 07:25, February 24, 2014 (UTC)

I don't know if you're aware, but Irrational Games finally moved their asses and posted the list of licensed music in their game, something they should have done since the release of the game as the link to it was written at the end of the credits. Anyway, here goes: http://www.bioshockinfinite.com/music

Also if I caught your attention, several months ago I worked a bit on a template which could reunite all form of media and tie-in stuffs in the series (games, artbooks, music, etc...). I have yet to reorganize all soundtrack pages according to this model, but I'm pretty sure I was able to regroup all that could be. Pauolo (talk) 22:15, February 24, 2014 (UTC)

You need to ban this guy as soon as possible, he's been replacing images with unrelated ones, and according to the other wikis he edited on that's not the first time he has done that. Pauolo (talk) 12:38, March 15, 2014 (UTC)

Theres not enough time, we need to make someone thats more often on this site to another addmin, not me, but people like Unownshipper, ZanyDragon and Pauolo.

I made a new template for the Radio Messages for the Minerva's Den (DLC). Should it be merged with anything? And why is it that the wiki seems to treat template pages like article pages when you first create them? --ZanyDragon (talk) 00:43, March 19, 2014 (UTC)

this person needs to be banned: user 50.161.235.192. He keeps editing the Elizabeth page, taking away her death and adding "Burial at Sea is non-canon" to her page.

Hi, I remember MegaScience telling me you didn't have BioShock Infinite yet so I'll keep myself from spoiling you as much as I can.

Currently the wiki is facing a dilemma since the release of the last piece of Infinite's narrative DLC, Burial at Sea, taking place again in Rapture. The problem is, this story hints that it is taking place in the same Rapture as the one depicted in the first two games, so we would be inclined to add its new story contents to the Rapture storyline/timeline pages. However, it also depicts Suchong's death as occurring after the 1958 New Year's Eve, as it was originally hinted in both the first BioShock and the novel, but contradicted by BioShock 2 which places it before the event.

Since Suchong's death is possibly the only contradicting element which keeps us from updating the storyline and timeline pages, me and several of the active editors would like to consider the date after the bombing to be the canon one. That would mean considering the few mentions of his death occurring before the bombing as non canon, but that won't break the cohesion in BioShock 2's storyline. And so, I would like to hear your opinion and approval on this issue before going with it.

Because the first five stages on BioShock 2 are missing the whereabouts of the Power to the People machines, Plasmids, Gene Tonics, Audio Diaries and that.

I think we should search, find, and uncover the information about There's Something in the Sea. (And maybe Industrial Revolution, too.) What say you?

Would you kindly help me find all the images of the letters written in the Something in the Sea site? Thank you. ZanyDragon (talk) 22:40, June 23, 2014 (UTC)

The pages for Kinetoscope and William R. Foreman are messed up. And I don't know for sure how to fix them. Would you kindly repair the damage? ZanyDragon (talk) 04:51, June 10, 2014 (UTC)

The End of the LineEdit

Hey, I'm asking all the regular and semi-regular contributors if they can help me come up with labels to finish up the BioShock 2 part of the Splicer models' appearance section. Would you kindly sheck out my blog and propose a line if you have any in mind: User blog:Unownshipper/Choosing Just the Right Words

A user named Santosnice has been posting articles that appear to be spam and nonsensical advertisements for other websites. This isn't vandalism per se, but I still don't think this sort of behavior is appropriate on the Wiki. Could you look into it?

Note: Any other editors reading this, feel free to chime in, as this subject doesn't concern just Gardimuer.

I'll just get straight to it - BioShock Wiki should move over to Curse's Gamepedia network. BioShock Wiki being a part of Curse's wiki network would offer tenfold more freedom than Wikia allows. Plus, articles would look better and you, being the coder of the wiki and all, would have more options (skins, for one; I think just about everyone who was an editor on Wikia's network before they started shoving their 'improvements' down our throats hates the current Oasis skin).

You should really consider it. If you do, I for one would most definitely assist you and the other editors of the wiki.

PS: Just look at the difference between Wikia's Witcher Wiki and Curse's Witcher Wiki, for example. Curse's superior wiki (aesthetically, content- and community-wise) is the result of the extra freedom alotted to editors on their network.

Help with the Games template?Edit

So I gathered that the Games template (Template:Games) is Creative Commons licensed, so I decided to try and test it on my own wiki (to reduce clutter, since our current templates that serve similar purposes are big and clunky, and take up too much space). After much fiddling and frustration, I got it to work...mostly. While the icons are in the right position and showing up normally, they show up...twice! The mouse-over dropper that'd normally appear isn't there, and the icon appears in both sizes. I'm not sure what broke but I figure you could help me fix it.

Hello, Gardimuer. You know these icons you used in the templates for the weapons and Plasmids in Rapture?

Well, how about creating ones for the templates for the weapons and Vigors found in Columbia? I was thinking maybe something similar to those shown here on the game's main menu:

Sorry to interfere with your work, but I gotta ask: is there ANY practicality and realism in the weapon upgrades in Bioshock, Bioshock 2, and Bioshock 2 Multiplayer?

This is ZanyDragon speaking. How did you create those interactive maps with the other icons? The first five BioShock 2 levels are still lack these features.

Retrieved from "https://bioshock.fandom.com/wiki/User_talk:Gardimuer?oldid=317096"
Community content is available under CC-BY-SA unless otherwise noted.