“Those Vacuum Bots sucked up all sorts of things before going on the fritz.”
― Charles Milton Porter[src]

The Vacuum Bots are domestic automatic vacuum cleaning robots developed by McClendon Robotics, and can be found scattered around the levels in the Minerva's Den DLC. They weren't without problems, though, as they tend to suck up more than just dirt. As such, each bot may contain a variety of useful items, but must be destroyed to find them.

There is an achievement/trophy called "Garbage Collection" for destroying all ten Vacuum Bots (five in Minerva's Den, five in Operations). 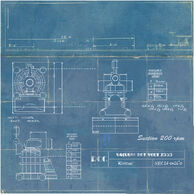 Blueprints for the Vacuum Bot, found in the Robotics Workshop of McClendon Robotics.

Model render of a Vacuum Bot.
Add an image to this gallery

Retrieved from "https://bioshock.fandom.com/wiki/Vacuum_Bot?oldid=312110"
Community content is available under CC-BY-SA unless otherwise noted.