Vending Machines are permanent fixtures produced by Fink Manufacturing, featuring themed Automatons that sell various items useful to the player during their journey through Columbia.

In Columbia, there are only three different kinds of useful Vending Machines, and Booker DeWitt is not able to hack the machines to lower their prices. However, if he uses the Possession Vigor on a vending machine, it will give out a large sum of Silver Eagles, with which goods can be purchased. This dispersal will only happen once per machine. Vending Machines selling upgrades will shut down once all available upgrades are purchased, and it is only when Booker reaches a new area that more upgrades will be available.

The Dollar Bill vending machines sell basic supplies such as health, Salts, and ammunition for weapons. The Automaton is dressed in a period business suit. This is the only vending machine that does not shut down, even if the player's current supplies are full. The jingle is a tune that sounds tuned toward children.

The Minuteman's Armory vending machine sells weapon upgrades for the player's arsenal. The Automaton is dressed in the uniform and tricorn hat of an American Revolution soldier. The jingle is a marching song on a drum.

The Veni! Vidi! Vigor! vending machines sell power upgrades for the player's Vigors. The Automaton possesses a wand and is dressed in the tailcoat and white tie attire of a magician. The jingle is a tune on a pipe organ.

In the headquarters of the Fraternal Order of the Raven and Finkton's Shantytown, there are two broken Mendelssohn Kinematic Couture vending machines, with the Automaton dressed as a Hebrew tailor, as apparent by the styled hair and cap, as well as anti-Semitic graffiti defacing its original sign. Although neither are operational, both have a piece of Gear in front of them, as well as symbols associated with the tailoring profession on them, allowing the assumption that they used to tailor Gear.

At the entrances to Raffle Square, Fink Manufacturing, and the Good Time Club, these machines welcome citizens to designated areas. The one at the entrance to Raffle Square opens a gate when possessed. The Automaton is dressed as a patriotic carnival barker wearing a turn-of-the-century-style boater hat. They do not have a jingle, nor do they drop Silver Eagles when possessed.

This broken vending machine distributes large medical bags and is decorated with the caduceus on its sides. There is only one of these in the game, located in one of the buildings adjoining the Plaza of Zeal. This machine can only be summoned by Elizabeth. The Automaton is dressed as a doctor in a white lab coat with a medical reflector around its head. Because it is broken, it periodically lets off sparks, doesn't talk, and the Automaton is limp and motionless.

Salts Machines fully replenish Booker's Salt meter when he interacts with them. They look like eccentric gentlemen carrying a funnel of smelling salts.

Only appearing in the downloadable content Clash in the Clouds, this vending machine is found in the maintenance room of the Columbian Archeological Society. It dispenses Infusions and Gear, and is only accessible between waves. Unlike the other vending machines, this one doesn't have an automated figure atop it.

Appearance concepts for the vending machines. 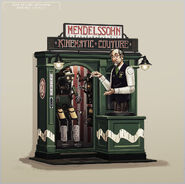 Early concept art of the Minuteman Armory (named Power to the People).

News paper boy concept art, nicknamed the "Newsie" (The concept idea was replaced by an actual boy).
Add an image to this gallery

A discount Dollar Bill vendor brought in through a Tear.

A broken Medical Kit machine summoned through a Tear.

Vending machines being manufactured at Fink MFG.
Add an image to this gallery

Retrieved from "https://bioshock.fandom.com/wiki/Vending_Machines_(Columbia)?oldid=319273"
Community content is available under CC-BY-SA unless otherwise noted.