“We have to follow her, convince her to open the gate to Comstock House.”
― Booker DeWitt[src] 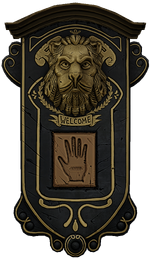 As the esteemed prophet and leader of Columbia, Comstock intended to set a virtuous example of the life good citizens must lead. However, with the untimely death of Lady Comstock and the vengeful anarchist Daisy Fitzroy running amok, Comstock closed down his home to the general public while he retreated to the Hand of the Prophet.

The former residence was converted into a research institution dabbling in delicate sciences. The entrance is barred by a lion-headed door automaton.

Whether courtesy of Fink Manufacturing or Lutece Labs, the door knocker automaton features a rudimentary artificial intelligence, visual recognition, and a handprint scanner. It will automatically recognize any authorized personnel with a friendly greeting, designed as the epitome of politeness and discretion.[2] The eyes of the lion head will flash upon successful scanning of the hand.

By the time Booker and Elizabeth arrive, the square has been devastated by raidings from the Vox Populi. The statue of Comstock has had its eyes gouged out while Lady Comstock remains pristine, surrounded by candles. A massive battle has taken place between the Vox and the police force as corpses litter the ground amidst barricades.

All three vending machines stand at the ready in an alcove.

The gate mistakes Elizabeth for Lady Comstock on account of her dress. However, her handprint is an unsuccessful match to open the gate which asks if she is "unwell." Elizabeth makes a determined choice to pay respects to her deceased mother in the Memorial Gardens and obtain a working handprint by any means necessary.

Upon their return, it is here that Booker faces off against the Siren for the final time.

Elizabeth vents her frustrations at the statue of her mother, armed with the new knowledge of her birth from the "truths" gleaned from Tears. The numerous corpses from an unnamed battle reanimate; Vox Populi and Founders alike become her unwitting slaves.

When Booker finally defeats the Siren, her minions become lifeless once again and her restless spirit flutters around the gleaming statue of Lady Comstock. Elizabeth ventures to have another tête-à-tête with the spirit, an amalgam of her mother's ghost and her own venomous frustrations with her parents. She reconciles with this otherworldly version of her mother, conspiring to work together against the man who brought such grief upon them.

Summoning her supernatural energies on last time, the Siren bypasses the elaborate door knocker entirely, reducing the gate into a pile of twisted metal. Elizabeth and Booker are free to gain entry to Comstock House. 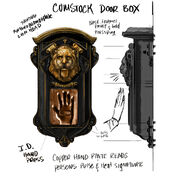 Concept art for the gate automaton, by Robb Waters.

The gate leading to Comstock House.

The Founders and the Vox Populi fighting side by side.

The gate after the Siren destroys it.
Add an image to this gallery

Retrieved from "https://bioshock.fandom.com/wiki/Victory_Square?oldid=306221"
Community content is available under CC-BY-SA unless otherwise noted.