BioShock Wiki
Register
Don't have an account?
Sign In
Advertisement
in: Spoilers, Quotes without a source, BioShock Infinite Vigors

Vigors are the wondrous tonics of Columbia, granting extraordinary abilities to its user after consumption. They are powered by Salts that can be found in phials in their raw form or by consuming special foods (usually stimulants, i.e. coffee, cigarettes, soda, etc.). Like the Plasmids used in Rapture, Vigors do cause notable side effects, visible on the user's arm. They also affect the user's mental stability by provoking short hallucinations when consuming a new type of Vigor. However, Vigors (with the exception of one) have an alternate use activated by charging it, ranging from enhanced attacks to stationary traps dealing four times as much damage.

There are eight Vigors in BioShock Infinite, which can be either found by exploring Columbia or bought from Veni! Vidi! Vigor! vending machines. Each tonic has two upgrades obtainable from the same machines, but for greater prices. Their effects can also be combined, giving the best of both Vigors with rather destructive results.

Although Vigors differ from Plasmids in their application (drunk rather than injected directly into the bloodstream), they share the same origin. Using the Lutece Device to look into another reality, Jeremiah Fink witnessed in November of 1894 the work of the geneticist Dr. Yi Suchong in Rapture and his creation procedures for Plasmids.[1] From this point, he assembled a laboratory to research and release them as Fink Manufacturing products. Fink also organized several underwater expeditions all around the Atlantic ocean in order to acquire and study Sea Slugs, whose ADAM is the base for Plasmids and Vigors.[2]

The research wasn't without risk and led to accidents, such as Devil's Kiss Vigors setting fire to a factory building in October 1900, which was then separated from the city to avoid its spread but condemned all workers trapped inside.[3] The incident that killed 359 people was covered up by Fink Manufacturing who assured the population of the tonic's safety once released,[4] although it only resumed production eight years later by Police demand.[5] These incidents eventually raised public concern as far as in early July 1912, and Fink reassured Columbia's fair inhabitants that it was a necessary evil for their own safety.[6] He also took the opportunity of hosting the 1912 Raffle and Fair the same month to promote and sell his products, including Bucking Bronco trials and free Possession giveaways.[7] Yet, a few people were still cautious about the next Vigors to be released and preferred to wait for Fink to improve their stability.

Even with active marketing to sell Vigors, Fink was losing money due to the cost of the underwater expeditions.[2] In early June 1912, he went to think about changing the structure of his Vigors to their original form and less expensive on ADAM: injectable Plasmids. He also went to copy the design of syringes used in Rapture to cut the cost of making individual bottles for each tonic.[8]

“A Life with Vigor is a life that's Bigger!”
― Fink Manufacturing advertisement

Vigors were advertised as either domestic aids (lighting a fire, lifting heavy loads or subduing automata), an alternative energy source to power Automated Stallions and Gondolas but also self-defense tools (Murder of Crows, "proven deterrent against hooligans"). Like other products from Fink Manufacturing, a few of them were actually credited to one or another inventor.

When the Vox Populi started taking action against the Founders, Vigors were requested by the Police to use them all as weapons. The conflict saw each side equipping themselves to take an edge, and Fink Manufacturing producing them in grand quantities. Vigors were then advertised in short films to be used offensively instead of being aids. What's more, some Vigors started to show their heavy toll on their users' body and mind, whether it be the Zealots of the Lady mastering the abilities of Murder of Crows and becoming delusional in their grief or Cornelius Slate overdosing on Shock Jockey to force Booker DeWitt into attacking him, and displaying blue crystals sprouting from various spots on his arms and forehead.[9]

Several Vigors reappear as Plasmids in the Burial at Sea DLC. While Yi Suchong observed and documented the sudden appearance of Tears in Rapture, which revealed Columbia, he discovered that his own formulas for Plasmids had been stolen by Fink. Fink had modified the formulas with an ingestable oxidation agent to create Vigors. To return the favor, Suchong would steal Fink's modified Plasmid formula.

Sold as drinkable Plasmids, these would be marketed as a substitute for citizens who did not like injections. Suchong would also use this modified Plasmid formula to create Old Man Winter, a new drinkable Plasmid which would have similar but different effects from its injectable counterpart, Winter Blast. While being similar to Vigors, the defensive effect of these Plasmids are not as potent or lasting against Splicers, due to their ADAM-enhanced bodies. The mental and physical side-effects from overdosing on drinkable Plasmids were much more severe than those caused by injectable ones, such as those seen on Frosty Splicers. These side effects appear to be brought on solely by over-consumption, rather than ADAM withdrawal.

Some information on early vigors can be found in the DefaultGame.ini section of the game files.[14] Further reference can also be found in The Art of BioShock Infinite.

Fink Manufacturing aggressively developed Vigors for many different uses, but a number of concepts were rejected for having no market for them, as well as unwanted results. A chalkboard describing these rejected Vigors can be found inside Fink's laboratory in Burial at Sea - Episode 2.

Byline: Forget everything you know.

Marketing Note: How do you plan to sell this dud?!

Byline: Read the inner thoughts of your houseplant!

Marketing Note: No demand for this type of product.

Marketing Note: No one wants a moldy puppy! 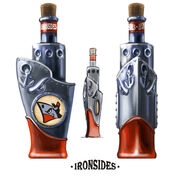 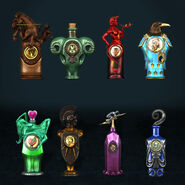 The Vigors in BioShock Infinite.

A Vigor Mod upgrade for Ironsides in Burial at Sea - Episode 2.