Visionary Wonder Stories is a magazine that has been very important in the There's Something in the Sea storyline. Its offices are located in New York City and its main editor is Lex Harlan. This periodical publishes many fictional stories that appeal to readers interested in strange phenomenon. One of the most well known stories published was "Utropolis" by a writer utilizing the alias of RØd Killian Quain. The story became widely popular with members of Phil Isidores UFO research community, NUFOS. This caused a surge of popularity for the magazine and for its editor.

During the events of Something in the Sea, it was revealed that RØd Killian Quain, an alias of Orrin Oscar Lutwidge, had used this magazine to publicize information about his time in Rapture, in his "Utopian Metropolis" manuscript. Unfortunately, Lex Harlan edited this manuscript so much that the setting is barely recognizable as Rapture, and Quain's chance to spread the truth was lost. However, Visionary Wonders capitalized on the increased popularity that this story brought. Quain also wrote a classified ad in this magazine in an attempt to contact his faithful supporters in the International Order of the Pawns. Mark Meltzer pieced together many clues related to Rapture and Lutwidge's history by reading these publications. 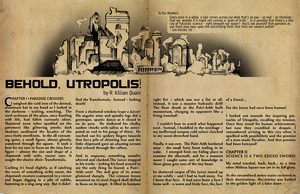 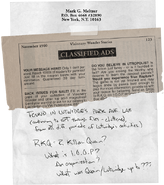 Add an image to this gallery
Retrieved from "https://bioshock.fandom.com/wiki/Visionary_Wonder_Stories?oldid=256255"
Community content is available under CC-BY-SA unless otherwise noted.