“Introducing the future of health and wellness, the Vita-Chamber.”
― Advertisement from Ryan Industries[src]

Vita-Chambers are devices that resurrect the player when they are killed.[1] Vita-Chambers are placed in convenient locations throughout Rapture so that a revived player will not have to travel too far to continue a battle. When the player is revived, they will be given a considerable amount of health and EVE. The player does not have a fixed number of lives, so the Vita-Chambers can be used without limit. 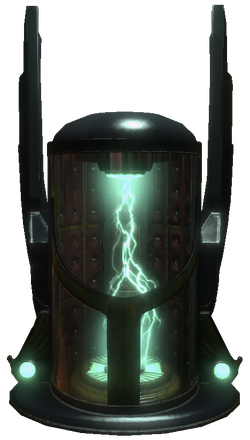 At some point in late 1958 to early 1959, Sinclair Solutions in partnership with Suchong Laboratories successfully manufactured the Vita-Chamber for Ryan Industries. The device is described as using a combination of Plasmids reconstructed within a quantum field entanglement to bring people back to life. According to Dr. Suchong, the key developers were his colleague Alexander and Sinclair himself. Suchong was also involved in the project, including the first deployment stage for Ryan Industries: the mass-production and installation of the device throughout Rapture. Despite his work on the project, he remained skeptical as to the device's "fantastical" abilities for resurrection.[2]

One of the drawbacks of the Vita-Chambers is that they can only bring a person back to life if he or she dies of trauma. Slow wasting sicknesses or genetic illness can not be cured by a Vita-Chamber, so an individual who died of such a condition would remain permanently dead.[3] It also appears that the Vita-Chambers can also revive a body independently of the time of death, as Subject Delta was resurrected nearly 10 years after his death.

Widespread advertisements for the Vita-Chamber describe it as "restoring vigor and spirit with the touch of a button." This implies that the chamber's true purpose of life-restoration was hidden from the population and only procured them restorative treatments. The Adonis Luxury Resort also had a Vita-Chamber as part of their treatments. By the time of Rapture's downfall in 1959, possibly hundreds of Vita-Chambers had been installed throughout the city.

Even though Vita-Chambers were installed in most parts of the city, Andrew Ryan was the sole subject to whom they were attuned and could resurrect. Thus, they would only act upon Ryan, or someone with a similar genetic code.[2] This is the reason only Jack, who is Ryan's illegitimate son, can resurrect at these chambers. After the fatal confrontation between Jack and Andrew Ryan at Rapture Central Control, Ryan doesn't revive because he had intentionally shut off the Vita-Chamber in his office. Re-activating it however will not bring Ryan back to life.

Once the player's health reaches zero, Jack will collapse, only to be revived at any nearby Vita-Chamber. Vita-Chambers are found throughout the game, at least two per level.

Players who are attempting to gain the "Brass Balls" achievement/trophy or the "I Chose the Impossible" trophy can choose to disable all Vita-Chambers after downloading the 1.1 patch and DLC for BioShock (though the player is not obliged to do so; simply completing the game without dying unlocks the achievement, regardless of whether or not the Chambers are on). If the player is playing with the Vita-Chambers turned off, the main menu will be brought up upon death.

The Vita-Chambers are still functional during the events of BioShock 2, even those caught in the flood of Dionysus Park a decade earlier. The protagonist, Subject Delta, is initially revived at a Vita-Chamber in the Adonis Luxury Resort after his death there nearly 10 years earlier. This is accomplished when a Little Sister, acting on behalf of Eleanor Lamb, re-keys the chamber to correspond with Delta's genetic code signature.[4] Later in Outer Persephone, Sofia Lamb stops her daughter's heart to provoke Delta's coma and natural death in order to bypass his revival at a Vita-Chamber from ever happening.

In BioShock 2, the Vita-Chambers in the game can be disabled by a choice in the Gameplay Options menu to make it easier to gain the "Big Brass Balls " achievement/trophy.

Vita-Chambers are also present throughout BioShock 2's downloadable content, Minerva's Den, though no explanation is given as to why Subject Sigma would be able to use the chambers deployed inside the facility.

The function of the Vita-Chamber is not included in BioShock 2 Multiplayer, but closed chambers can be seen in the multiplayer maps of Arcadia and Hephaestus.

The exclusive Gene Tonic Resurrection is a "Tonic" version of the machine that resurrects a killed player, though only once.

The Vita-Chamber of the Bathysphere Station at the Welcome Center is seen when this place is revisited at the end of BioShock Infinite.

In BioShock Infinite's downloadable content, Burial at Sea - Episode 2, a stage one prototype of the Vita-Chamber can be found in the hidden research area of Dr. Suchong's Free Clinic. A chalkboard beside the device shows its schematics with notes from Suchong's diary on the project, such as the plans to first outline the mass production and distribution of the Vita-Chamber throughout Rapture to complete stage one. A note at the bottom of the board mentions how each device must be tuned to Andrew Ryan's specific genetic frequency before distribution.

Model and concept art for the Vita-Chamber, by Mauricio Tejerina.

A Vita Chamber as seen in BioShock 2. 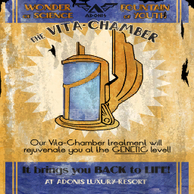 Advertisement for the Vita-Chamber treatment at the Adonis Luxury Resort.