The Vox Cipher is a secret code created by the Vox Populi. These messages appear as red graffiti scrawled across walls. Only by finding the Code Books can these symbols be decoded. Once these codes have been translated, they provide hints which can lead Booker DeWitt to finding secret areas where the Vox stored resources in their efforts to combat the Founders.

In her isolation, Elizabeth has studied codes and cryptography. With the specialized Code Book, she can translate the Ciphers left by the Vox Populi. Vox Ciphers show up three times during BioShock Infinite. The following is a list of their locations.

The chart and example phrase. 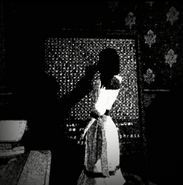 Vox Cipher from The Fellow Traveller.

A hidden cache behind broken clock.

Vox Cipher from Bank of the Prophet.

A secrete cache hidden in the Bank.

A mysterious card handed to Booker in Comstock House.