Manley: Got a tip there were contraband guns hidden in the Fellow Traveller. Didn't find 'em, but -- funny thing -- we found some old uniforms under the floorboards from the war. Took guesses as to why they were there, but -- *Door Opens* Who's there? *Footsteps* You're Slate, right? Sir? Put the guns down! *Gunfire* *Screams*

Slate: Did you hear that, Comstock? That is the sound you have never heard -- the sound of a soldier's end. Come to your "Hall of Heroes". Prove me a liar.

Location: Hanging on a cabinet in the kitchen of The Fellow Traveller. 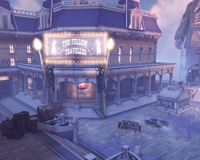 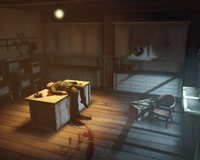 Retrieved from "https://bioshock.fandom.com/wiki/Vox_Contraband_Inventory?oldid=297125"
Community content is available under CC-BY-SA unless otherwise noted.