“Who is this Prophet? Who is this fraud, this charlatan, this salesman of snake oil?”
― Daisy Fitzroy[src]

The Vox Populi (Latin for "Voice of the People") are a militant underground insurgency group led primarily by revolutionary Daisy Fitzroy. They are in open conflict with Zachary Hale Comstock and the Founders, rejecting their puritanical and xenophobic ideology. Though initially the middle and upper classes of Columbia regard the Vox as simply a worrisome nuisance, referring to them derisively as "anarchists", as Booker DeWitt progresses through Columbia it becomes apparent that the city is on the verge of revolution, which eventually breaks into an all-out destructive war.

Led by Daisy Fitzroy, the Vox Populi first began as a protest group and a confederation of working-class citizens and oppressed groups, but as it became more organized, its members grew more militant. Driven underground by the Founders' response, the movement eventually abandoned its initial peaceful tactics in favor of retaliatory violence against the Founders. They had even set up a secret code, called the Vox Cipher, to keep secrets hidden from their enemies.

Though the Vox do not claim to adhere to any particular ideology, their original goal was to breach the divide between Columbia's privileged few and the rest, erasing the social and racial boundaries imposed by the Founders. As idealism turned to bitterness, however, the Vox simply sought to appropriate all that belonged to their oppressors.

Once revolution breaks out in Columbia, the Vox show their true colors. Driven by vengeance, they destroy entire portions of the city and vandalize the rest, executing anyone standing in their way. They also torture innocent citizens they come across, inflicting upon them the same oppression they lived through. Vox Populi members can be seen murdering, robbing, and terrorizing civilians in Emporia.

The Vox Populi draws its main recruitment from Columbia's segregated communities. Among these are Irish, Asians, Blacks, Italian, and Native Americans. Another recruitment source is the working class, in lower-class neighborhoods and market shops. Joining minorities within Columbia, there are supporters among the white Protestant population of Columbia.

Most of the Vox Populi's symbols exist to oppose those of the Founders: In stark contrast to the Founders' puritanism, the Vox adorn themselves with devil horns and hoods. In mockery of Jeremiah Fink's perception of workers as cattle, many Vox fighters wear helmets in the shape of bull heads. In opposition to the Founders' blue, the Vox's primary color is red. In combat, Vox fighters tend to imitate the battle cries of Native Americans, one of the many groups the Founders attempted to eradicate. Later in the game, hijacked Motorized Patriots bear the features of Abraham Lincoln, a figure reviled by the Founders for his support of the oppressed. Some Vox fighters make use of clothing and equipment appropriated from the Founders, such as body armor and masks, which are decorated with their signature red paint. They perform similar modifications upon hijacked hovercrafts and Zeppelins, lashing long sheets of red cloth to their hulls in order to mark the vehicles' change of allegiance.

“The Vox and weapons go together like fire and gunpowder. One spark and we'll have a blaze we cannot control.”
― A Founder Commander[src]

During the events of BioShock Infinite, the Vox Populi's status changes from an underground resistance group to the dominant power in the city. When Booker enters Columbia, the Vox are organized and ready to fight, but lack the weaponry needed to stand against the Founders. As part of a deal with Daisy Fitzroy, Booker and Elizabeth set out to find Chen Lin, a Chinese gunsmith sympathetic to the group's cause.

When Chen Lin is found to be dead, brutally murdered at the hands of Fink's henchmen, Elizabeth opens a Tear to an alternate Columbia, one in a state of revolt. In this Columbia, the conflict between the two factions is at a tipping point, though Chen Lin, partially phased out of time, has had his tools confiscated. Traveling through to Shantytown, home of the poor and oppressed citizens of Columbia, the pair arrive at the local police station to recover what they find to be a huge pile of the gunsmith's tools. After passing through another Tear where the tools are no longer in the police station, Booker and Elizabeth find themselves in a Columbia in the middle of an uprising. In this changed reality, where an alternate Booker was a lieutenant of Daisy Fitzroy and working with Cornelius Slate to bring down Comstock's reign of oppression, dying in the process, Chen Lin and his wife are dead, but not before the gunsmith had supplied enough weapons for an armed revolution.

After Booker assists the Vox in taking over Finkton, Fitzroy kills Jeremiah Fink, ending his ruthless exploitation of the poor. Paranoid, bloodthirsty, and mad with power, Fitzroy orders the death of Booker and Elizabeth as a counterfeit, and she is then killed by Elizabeth when she attempts to execute Fink's son. Now leaderless, the Vox Populi proceed to rampage across Columbia, burning entire Founder districts to the ground and murdering many innocent citizens. Booker and Elizabeth head out to destroy the Siphon, while the whole of Columbia is shown to be in flames as the Vox take over the city.

Members of the Vox Populi[]

The Vox all locked up in the Good Time Club prison.

A Beast loyal to the Vox.

A pair of Vox Populi Soldiers.

Another pair of Vox Populi soldiers.

Vox Populi patriot, carrying a soldier, in the likeness of Abraham Lincoln.

A Vox sniper up on a roof.

A Vox soldier looking over an unearthed grave in Memorial Gardens.

Booker faces off two Vox soldiers on the Hand of the Prophet.

The Vox' mark in Finkton.

Concept art of a female Vox. 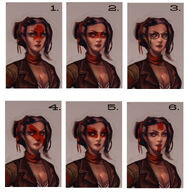 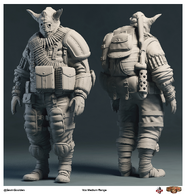 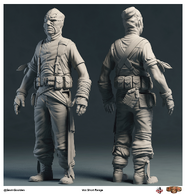 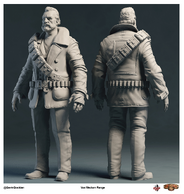 A Vox Populi member showing distaste for the Founders.

Vox Populi members on the attack.

After the member tossed a well off man down stairs.

The Vox Populi's arrival via zeppelin.

The same Vox Populi member who pushed the citizen down the stairs.

Another in Elizabeth's way.

The same member after a brief conversation with Booker DeWitt involving Elizabeth.

One of the diverse members of the Vox Populi.

A Vox Populi member abusing and robbing a Columbian Dentist.

A member's crimson side.

Booker faces a Vox member in the early gameplay demo. 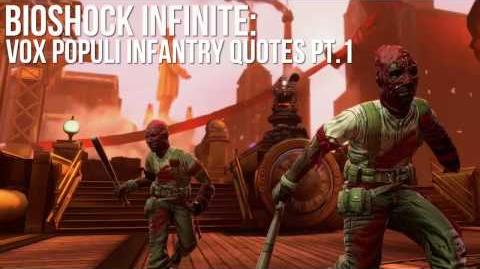