The Splicer model Waders is one of Rapture's religious fanatics. Despite the atheistic orientation imposed by Ryan, this ADAM-warped zealot believes himself to be an avenging angel serving an angry God by punishing the sinful denizens of Rapture. His accent and some of his dialogue indicate that he is of Hispanic origin.

The following are phrases that Waders says in BioShock. The name of the source audio file is listed when known.[Audio files needed]

If the Player Flees[]

Some Splicers in the BioShock Infinite downloadable content Burial at Sea - Episode 1 and Episode 2 have the iconic surgically reconstructed "face mask" of the Waders model from BioShock. This face has closer similarities to the Wader's original concept design than of the finished model seen in the first game.

Waders wears a multipurpose outfit suited to a number of different blue-collar or labor-intensive occupations such as a factory worker, dock worker, fisherman, engineer, farmer, mechanic, etc. It consists primarily of the boot-to-chest wading trousers for which the Splicer is named; although, the pants are made to look like overalls on some of the models. Additionally, he wears a pair of worker's gloves and an open, long-sleeve shirt with the sleeves rolled up over a dirty undershirt. Splicing and the Civil War have left Waders extremely scarred, both physically and mentally. He appears to either have had the skin of someone else's eye area grafted onto his, or, more disturbingly, to be wearing it as some form of mask, presumably done for "Father" (God or at least the voice of God he seems to hear in his head). His head is scarred and his right sleeve is torn. He has bloodshot eyes and blackish brown hair in a 1950s style flattop haircut. His clothes are soiled, bloodied, or otherwise stained. Waders can wear either a navy-blue or blue and white pinstriped "newsboy" cap or a welding mask as an accessory.

Model 1: The primary model wears a pair of khaki overalls, red shirt, and brown gloves. His “face mask” is a visceral red color and is exaggerated to look like it was crudely stapled to his head; also, blood drips from its lower corners. He has large patches of drying blood splattered across his outfit.

Model 2: This model wears a pair of denim overalls, red and black plaid shirt, and orange gloves with yellowish trim. His “face mask” matches his skin tone and he has thin streams of blood dripping from his nose, mouth, and eyes. He has teal, luminescent grime covering much of his lower body and blood covering the upper part.

Model 3: This model wears a pair of brown overalls, yellow shirt, and black gloves with brown trim. His “face mask” is flesh colored. He has large blood droplets covering the upper part of his body and face.

Model 4: This model wears a pair of yellow wading boots, red and white plaid shirt, and yellow gloves. He seems to be suffering from vitiligo. His “face mask” is a pinkish color, but is far less noticeable than the some of the other models’; likely, it’s just meant to look like part of the skin's pigment discoloration. He has brownish grime covering much of his waders and gloves.

Model 5: This model wears a pair of olive colored wading boots, blue shirt, and black gloves with yellowish trim. His “face mask” is a splotchy, ruddy color and the rest of his face looks like it's been burned. His entire body is soiled with rust colored splotches. His hair, unlike the other models', is auburn.

Model 6: This model wears a pair of brown overalls, green and black plaid shirt, and black gloves with green trim. His “face mask” matches his skin tone; almost to the point of being unnoticeable. He has dried blood smeared around his mouth dripping down to his waist as if he's been drinking it. He has soil and grass stains covering his clothes and body.

Model 7: This model wears a pair of dark taupe wading boots, chartreuse shirt, and black gloves with yellowish trim. His “face mask” almost matches his skin tone, but is a little too pink; he has blood smeared around mouth. His pants are streaked with bleach stains or white paint while his upper body is covered in blood spray. 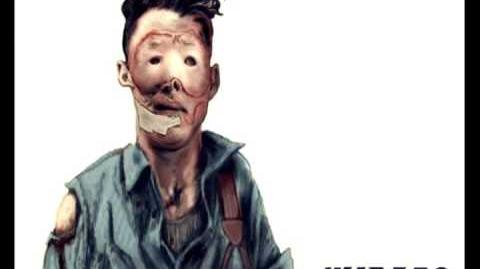 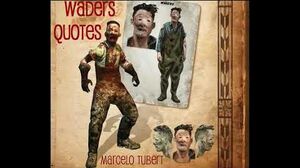 More dialogue from Waders in BioShock.

The original concept sketch for Waders. 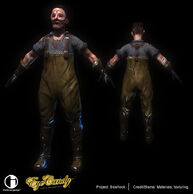 The Waders appears in the form of a Nitro Splicer.

A Waders in Hephaestus wearing a welding mask.

A retooled Waders head used for splicers in Burial at Sea.