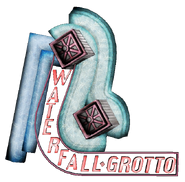 “If the Rosa Gallica bloom, then by God, I'll know we're in business…”
― Julie Langford[src]

The Waterfall Grotto is a subsection of Arcadia in Rapture. It, like much of the rest of Arcadia, has fallen into disrepair from disuse thanks to the chaos of the Civil War. Now its former glory is all but hidden away beneath the plant growth, rubble, flood-waters, and shadows.

In Rapture's heyday, the Waterfall Grotto was another of many scenic locations in the underwater city's vast botanical garden. The area served as the perfect symbolic union of industry and nature. The space's multiple water wheels evoked man's ability to harness the raw forces of nature for power while the free-flowing water created a serene atmosphere.

The area was also a spot of interest among Rapture's scientific community. Acclaimed botanist Dr. Julie Langford researched various plants in the space's lush environment including the flower Rosa Gallica. Her experiments were interrupted when Arcadia was put under a lockdown by some unspecified incident.[1]

Jack first reaches the Waterfall Grotto shortly after entering Arcadia. From the Arcadia Glens promenade, he can enter the area and explore it, but his main objective at that moment is to reach the district's Rapture Metro Station in Rolling Hills.

Later on, Andrew Ryan releases a deadly poison into the air system which kills most of the plant life. Jack seeks out Dr. Langford to reverse the process before the oxygen runs out. She instructs him to head to the Waterfall Grotto and collect a bud of Rosa Gallica so that she might test an experiment she's been working on.

The entrance to the Grotto is composed of a small, pleasant courtyard. Like so many other places in Arcadia, the ceiling has been sponge painted to resemble a lightly clouded sky. Various pipes controlling the water works cover the wall, but are almost enshrouded by overgrown plant life. To the right on a bench is the Audio Diary The Market is Patient, to the left is a Little Sister Vent. Tucked into the back corner is a U-Invent where some poor soul died while trying to craft weapons during the Civil War, the corpse, his Grenade Launcher, and the two Heat-Seeking RPGs he assembled can be found on the ground.

After the herbicidal fog is released and Jack reaches the entrance, he'll observe a mob of Arcadia-dwellers beat a Saturnine cultist to death, believing him to be the cause of the blight.

Down a short set of steps off the entrance, one may gain access to the Grotto proper. A stairway that winds around the perimeter of the two story room connects the upper and lower level. The space is overgrown and the drainage system is backed up slightly allowing water from the various falls to collect in an ankle-deep pool across the floor.

While the area still has a natural beauty to it, the space is anything but relaxing. The stairway down is blocked by four Trap Bolts strung up along the way. A Good News Brand fruit crate can be levitated using Telekinesis and used to safely trip the wires, but it may prove useful to leave them in place for now. The first two can be crouched under, but the third one needs to be jumped over. Complicating things is a rare flamethrower turret set up by a gate that's rusted shut and hidden behind leafy vines. The final two electrified wires can be bypassed by leaping onto a boulder, but that leaves one open to two machine gun turrets, one set up on the staircase landing and another one set up in the alcove on the lower level. The final defense is a Security Camera hanging above a broken Circus of Values vending machine out of which three Frag Grenades, a Health kit, and a bag of Potato Chips have spilled.

A lone Leadhead Splicer walks back and forth searching for valuable materials at the base of the waterfall, at a bush by the staircase, and by a corpse slumped over a lantern and the audio diary Offer a Better Product. The needed bud of Rosa Galica blooms at the base of the largest waterfall. On top of a crate next to a leaf sample is Langford's diary Early Tests Promising.

After Jack picks the rose, a pair of Splicers will rush into the room, so it may be beneficial to save some of the Security Devices to take them out. Other valuables in the area include a pair of Proximity Mines next to the lower machine gun turret and the contents of the storage crates in the center of the room and in the northwest corner and a huge supply of oxygen tanks or oil drums to be used as weapons located throughout the space.

There is a small storage room in between the upper and lower level which contained the janitorial supplies and some heavy machinery. The door has shorted and requires a jolt of Electro Bolt to open. Inside are some useful materials including a roll of film beside a storage chest containing invention components. Around the corner and past the dead cat is the audio diary Heroes and Criminals, an EVE Hypo, and a set of ten antipersonnel auto rounds.

The small courtyard in the lower southern quadrant has the aforementioned flamethrower as well as a Bot Shutdown Panel and a Gene Bank. Some loot can be found on the female corpse and in her handbag as well as inside the storage crate, but there's not much else back there.

An early version of the Waterfall Grotto.