“Atlas radioed on ahead. Says you were looking for an invite to the fisheries. Nuts, I say. But, if'n you heads up to the wharf master's office and find ol' Peach a Research Camera, maybe I could manage an invite.”
― Peach Wilkins[src]

The Wharfmaster's Office is the headquarters of the security forces in Neptune's Bounty. Jack travels here in order to find and use the Research Camera to research Spider Splicers.

The Wharfmaster and his staff oversaw the management, operations, and upkeep of Neptune's Bounty and the businesses therein, including Fontaine Fisheries, The Fighting McDonagh's Tavern, and Jet-Postal Substation II. Located on the top floor of the Upper Wharf, the Wharfmaster's Office contained work areas for the office staff members as well as two small jail cells intended to hold the occasional stevedore who got into a fight or an argumentative bar patron who had one drink too many and needed to sober up.

Frank Fontaine established Fontaine Fisheries as a front for smuggling contraband from the surface into Rapture. Due to the secrecy of the smuggling ring, or because of Fontaine's power and influence, the Wharfmaster's forces either didn't know about or were unable to control the transportation of the smuggled goods.

As Andrew Ryan became more and more desperate to stop Fontaine's smuggling operations, he ordered Chief of Security Sullivan to personally step in to find proof of the smuggling activities. The Wharfmaster's Office was taken over by Ryan Security as their base of operations. From the Office, the constables began arresting, interviewing, and interrogating suspected smugglers, seizing contraband, and gathering evidence. Due to the smugglers' extreme fear of Fontaine, and murder of potential witnesses, it was difficult to build a case against him. Several Security Devices were set up in the area for extra defense.

At some point before Jack's arrival to Rapture, the Wharfmaster closed the entire Upper Wharf, locking off access to McDonagh's Tavern, the Jet Postal station, and even the entrance to the Office itself.

Peach Wilkins barters entrance to Fontaine Fisheries for research photographs of three Spider Splicers. He tells Jack that a Research Camera needed to take these special pictures is located in the Wharfmaster's Office.

Jack journeys to the Upper Wharf, finding a RPG Turret beside the locked entrance to the Wharfmaster's Office. Up the stairs are a pair of Security Cameras and some Frag Grenades hidden behind some crates near the second Camera. The Wharfmaster's Office is under high security; there are two RPG and two Machine Gun Turrets, as well as Security Cameras that keeps watch over the hall, Office, and jail cells. Even with these extreme security measures, it is clear upon entering that the Wharfmaster's Office was the site of an extreme firefight, which caused severe structural damage beyond that of the normal deterioration in Rapture.

This area was the center of the Wharfmaster's Office and was where minor offenders and suspected smugglers were kept for a short period of time. A dead Big Daddy is in the left cell and a Ducky model Splicer Corpse is in the right one. The hallway surrounding the cells have crates of contraband and files strewn all over the place. The door to the small office on the left has malfunctioned, while the door to the interrogation room has been completely blocked by debris. According to the indicator light, someone is still inside.

After smashing the lock to the back area, Jack finds that the hall is blocked by massive amounts debris, but there is a hole in the wall. The hallway here was built with large windows overlooking part of the Upper Wharf for security, and also leads to Sullivan's office.

This room on the left corner was likely used for administration for the security of Port Neptune. The office's window allowed whoever sat at the desk to see who was brought into the office before they even entered the cells. It is watched by a security camera, which can easily spot the player as they are forced to crawl through the vent beside the door. A safe in the corner contains three Antipersonnel Pistol Rounds, two Heat-Seeking RPGs, and twenty-three Dollars.

When Ryan Security took over the investigation, Sullivan confiscated a small office in the back for himself. From here, he worked tirelessly to crack the smuggling ring and connect it to Fontaine. The office has a viewing window to the Interrogation Room, and a board on the wall over his desk shows the photographs of suspected smugglers Sullivan likely interrogated, one of which appears of have been an officer himself. A mop bucket and desk drawer have been left out to catch dripping water, it appears the ceiling was prone to leaking. The needed Camera can be found on Sullivan's desk.

Through the one-way mirror, Jack can see the corpse of an interrogator and the Spider Splicer who killed him. After Jack takes a few pictures, the Splicer leaps through a hole in the ceiling.

While Jack is heading back out, an explosion rocks the Office. The original way back is blocked off, but a new path to the rest of the Upper Wharf has opened thanks to a smashed window.

Concept art for the logo. 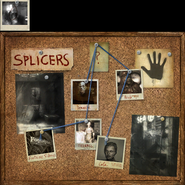 The back of the Office is blocked off.

The file area in the back.
Add an image to this gallery

Retrieved from "https://bioshock.fandom.com/wiki/Wharfmaster%27s_Office?oldid=314296"
Community content is available under CC-BY-SA unless otherwise noted.