White Oats are a breakfast cereal in Columbia, produced by The National Grain Company. They restore a small portion of Booker DeWitt's health when consumed.

In Burial at Sea - Episode 1, White Oats is renamed as cereal produced by The Arcadia Grain Company.

A poster for White Oats, as found in Rapture.

A box of White Oats, as found in Housewares.

A cut-out from the White Oats ad used as a head on mannequin, representing a bridesmaid in a Splicer's imaginary wedding in the Bridal store. 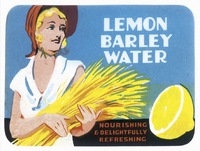