"Would you kindly" is a phrase that was programmed to function as a trigger for the post-hypnotic suggestions programmed into the mind of Jack. The system was created by Dr. Yi Suchong and was used by Frank Fontaine, posing as Atlas, to control Jack's actions while guiding him through Rapture to achieve his plans for killing Andrew Ryan.

The phrase is first seen on the gift from home Jack is holding during the flight at the beginning of the game. The message is only fully seen later through a flashback which reveals that the contents of the package included a letter containing the trigger phrase along with coordinates for bringing down the plane near the Lighthouse, the surface entrance to Rapture.

Acting as Atlas, Fontaine contacted and guided Jack as soon as he reached the city. Fontaine used the control phrase sparingly; for instance, he never commanded Jack to harvest Little Sisters, allowing him to choose freely whether to harvest or save them, probably so Jack would not suspect his manipulations. Using too much of this specific phrase might have tipped his hand and revealed his true identity to Ryan and Brigid Tenenbaum (who worked in collaboration with Suchong on Jack's body), among others.

Not long before Jack was able to reach him, Ryan pieced together the plot against him and the mind control phrase's power over Jack. During their final confrontation, Ryan demonstrates it to Jack and then uses it to force Jack to kill him, illustrating the personal philosophy he maintained all his life: "A man chooses, a slave obeys."

Later, Fontaine tries to use the phrase to force Jack to commit suicide, but this fails because Tenenbaum has already removed the trigger and others from Jack's mind while he was unconscious in her sanctuary.

Fontaine, however, answers to this by utilizing another trigger phrase: "Code Yellow", which according to him is supposed to order Jack's heart to stop beating in order to kill him. However, because the heart is an autonomous muscle that acts independently from the brain, the phrase only results in Jack's maximum health being lowered on multiple instances until he can obtain an antidote to rid himself completely of Fontaine's mind control.

Usage Throughout the Game[]

Although the phrase is never explicitly mentioned during the game, two audio diaries by Sofia Lamb, both of which are found in Fontaine Futuristics, reference it as "W-Y-K".

In "Means of Control", Lamb reflects over the news of Ryan's death at the hands of Jack. She is also somehow aware of Jack's mental conditioning and ponders the idea of taking advantage of it for her own agenda. In "Gil's Place in the Plan", it is revealed that Sofia had implemented behavioral constraints inspired by "Project W-Y-K" on Gilbert Alexander that would make it his instinct to serve what she had defined as the "common good", and become the first "Utopian" she idealized.

It is likely that in spite of being strongly inspired by its achievement, Lamb had managed to dig up very little about the nature of the mind control used to manipulate Jack, including the exact words of the trigger phrase and the mechanism of the mental control conditioning itself. This can be inferred by the context in which "Project W-Y-K" was mentioned by Lamb; implying it to be behavioral conditioning via a gauntlet of various platforms in psychiatric treatment. It is evident that Lamb's project had some results, as she had managed to place Augustus Sinclair under her thrall when he was captured and converted into an Alpha Series Big Daddy, and having him attack Subject Delta against his own will.

While trapped in Fontaine's, some of Atlas' men back up in the city attempted to track down something referred to as the "Ace in the Hole". They kept Atlas up to date on the search by sending him messages via morse code, but they were unsuccessful in finding the Ace; Tenenbaum was presumed either dead or in hiding, and Suchong was protected by Ryan.

When Elizabeth is forced by Atlas to retrieve the "Ace in the Hole" from Suchong's lab, she manages to locate it and decode it using the Vigenère cipher before giving the code to him. Through a series of visions, it is revealed to the player that the phrase is "Would You Kindly". Elizabeth sees through multiple visions the future of Atlas, seeing his downfall as Fontaine by Jack's hands, as well as Sally being among the Little Sisters rescued by Jack. Knowing this, she willingly gives it before Atlas kills her, with Sally remaining by her side. 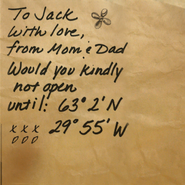 The note on Jack's gift. 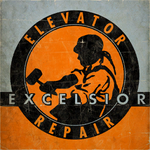