The Wrench, forged in Rapture by De la Plante Tools, is a melee weapon that appears in both BioShock and BioShock 2 Multiplayer. It is also a common weapon of choice for Thuggish Splicers.

The Wrench is the only melee weapon available in BioShock. This twelve inch pipe wrench is located at the beginning of the game, during Welcome to Rapture. The player can also pick up the wrenches dropped by Thuggish Splicers, although doing so has no effect. The wrench is one of two weapons in the game that cannot be upgraded, though there are a number of Physical Tonics and Combat Tonics that enhance Jack's combat ability with the Wrench. When properly equipped, the Wrench has the highest damage per second of any weapon in the game. With the exception of Big Daddies, it is capable of killing every enemy on any difficulty in a single hit.

Note: Damage bonuses gained from research and the Damage Research Tonics are calculated with using the result value in the above equation as a base.

Note: Only the first attack on an unaware opponent will have the damage bonus applied.

Note: Only the first attack on a shocked opponent will have the damage bonus applied. This combination is called the "One-Two Punch" by Atlas.

A Wrench with the Frozen Field Tonic equipped.

BioShock-themed real-world stickers, featuring the Wrench, just next of the leftmost Big Daddy at the bottom. 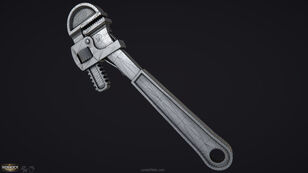 Renders of the wrench model from BioShock: The Collection. By Cordell Felix. 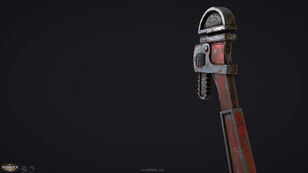 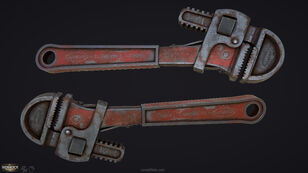 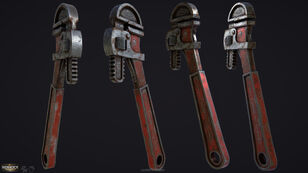 All playable characters in BioShock 2 Multiplayer are able to select the Wrench as their melee weapon. This is purely cosmetic, however, as all selectable objects for a melee weapon function the same, in terms of damage.

Barbed wire attached to a stick.