Transcript: Ol' Pauper's Drop's the worst neighborhood in Rapture -- but it's a hell of an opportunity to raise up some ah, affordable housin'. When Atlantic Express was constructin' their luxury passenger line, this place was hollowed out beneath as flophouses for the railway crew. Nobody was s'posed ta reside down here long-term -- but when you're broke in this town, you're not exactly swimmin' in alternatives. I don't favor spendin' more than an hour or so down here at a time. There ain't a side of the tracks more wrong than under 'em.

Location: Behind the Sinclair Deluxe reception desk, left side. 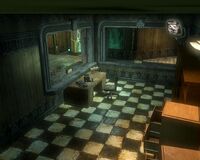 Retrieved from "https://bioshock.fandom.com/wiki/Wrong_Side_of_the_Tracks?oldid=222167"
Community content is available under CC-BY-SA unless otherwise noted.