Dr. Yi Suchong M.D. (易蘇崇[1]) was a leading medical researcher in Rapture studying ADAM and its uses to create Plasmids and alter brain function, as well as creating the Little Sisters and Big Daddies. Usually referring to himself in the third person, Suchong was an egomaniacal opportunist, using even tragic events such as war to his own benefit. He conformed perfectly to Rapture's society and worked simply for the highest bidder.

The life of Dr. Yi Suchong began as the son of a lowly house servant in rural Korea. But, when World War II occurred, he seized opportunity from the serious upheaval all across Asia.[2]

During World War II, Suchong was in Korea at the time of the Japanese occupation, and was accused of selling opium to the Japanese to fund his experiments.[7]

Most of Suchong's years before Rapture are clouded, but he mentions in one of his Audio Diaries that "Japanese kill every man in my city." Suchong was spared during the slaughter because he supplied the Japanese troops with opium.[8] A Chinese newspaper reported Suchong's disappearance in December 1946 as he fled to avoid being hunted down by the Chinese Government for collaboration with the enemy.[1]

In Rapture, Suchong set up an independent research firm, Suchong Institute and Laboratories, which contracted out to Ryan Industries and Sinclair Solutions. In 1951, Suchong grew dissatisfied with the inconsistent funding provided by Andrew Ryan and began covertly working for Fontaine Futuristics.[9]

Employed by Frank Fontaine, Suchong was directly involved in the genetic research department of Fontaine Futuristics, creating and improving much of the company's Plasmids line such as Enrage and Telekinesis.[10] While Brigid Tenenbaum was responsible for the Little Sisters' physical ability to process ADAM from the dead, Suchong was responsible for the mental conditioning giving them the need to "gather" the substance from corpses. Despite his obvious disdain towards them, many of the children Suchong experimented on referred to him affectionately as "Papa Suchong." Suchong later realized that though the Little Sisters were resistant to physical damage, they still only possessed the strength of small children and needed protection, lest they be "harvested" prematurely. He was instrumental in the creation of the Big Daddies and the mental conditioning that forced them to guard the Little Sisters at any cost.[8][11]

Suchong was involved in Fontaine's project to create an "ace in the hole" weapon, namely Jack. Suchong monitored Jack's rapid development and implanted in him at least two known mind control triggers: "Would You Kindly" (codenamed WYK), which caused Jack to obey unquestioningly, and "Code Yellow", which, when activated, would ultimately stop Jack's heart. To test the mind control phrase, Suchong ordered Jack to break the neck of his puppy. Initially, the boy refused, but when Suchong asked him again, this time using the WYK phrase, Jack had no choice but to obey. Despite his obvious reluctance, he snapped the dog's neck, killing her. Suchong developed an antidote, Lot 192, for this mental conditioning, as Fontaine requested because he worried he would "…end up on the wrong side of grift."[12]

In 1958, after Frank Fontaine's faked death and the nationalization of Fontaine Futuristics by the Rapture Central Council, Suchong hoped to "play hard to get for a bit" before he would work for Andrew Ryan. Suchong was eventually forced under Ryan's employment when the latter threatened to lock him up with the rebels in Fontaine's Department Store. He continued his work on Plasmids and the Little Sisters for Ryan Industries, and eventually their Protectors.[13] After the unrest in the city finally erupted into Civil War, Suchong suggested a pheromone system be put into marketed Plasmids, allowing the city's founder to control his genetically modified customers.[14] Suchong found working under Ryan to be difficult due to inept co-workers[15] and budget cuts.[16]

In early October of 1958, Suchong discovered a strange "shimmer", a window to the city of Columbia set in a different universe and at another time.[17] Obsessed with finding the source of this strange phenomenon, he employed observers to find more visible Tears, in which (as he recorded on October 15) one of them reported its connection to a mysterious "young woman" seemingly using them to vanish at will. Suchong vowed to find this woman to create a "new phenomena".[18]

Suchong feared for his life during Andrew Ryan's takeover of Fontaine Futuristics, when Frank Fontaine was supposedly killed along with many of his Splicer allies. When the surviving group of Fontaine's Splicers were sent to be imprisoned inside of the seized Fontaine's Department Store, Suchong was given a choice by Ryan to either be locked with them, or to earn a large salary by working for him exclusively. Naturally, Suchong chose the latter option.[19]

Later on in October, Suchong discovered that Jeremiah Fink, the leading businessman of Fink Manufacturing in Columbia, was pirating his work on genetics, mostly on Plasmids. In retaliation for theft of his intellectual property, Suchong stole Fink's design for making ingestible Plasmids through an oxidized agent. Upon presenting this new formula to Ryan, Suchong received a great deal of praise, and marketed these drinkable Plasmids as an alternate for users who don't prefer painful injections before the end of the year.[20] This gave Suchong a "two-way street" to steal more of Fink's inventions,[21] such as Gears.[22]

It was also mentioned by an ex-Zachary Hale Comstock (now using his birth-name, Booker DeWitt) that he attempted to pry some answers on what happened to his adopted daughter, Sally, from Suchong, by strapping the scientist to a chair and interrogating him for 15 hours. This was unsuccessful, as the girl had been made into a Little Sister.

The scientist used his Free Clinic at the Artemis Suites to continue his research and development using a supply of unsuspecting free test subjects, a strategy his former employer Fontaine previously had used in Fontaine Clinics in Pauper's Drop. Ironically, one of his tests to create a protection bond in a Big Daddy led to his own demise. During a moment of frustration regarding his failure to imprint the mental conditioning on the Big Daddies, he struck and cursed at a Little Sister who was talking over in an annoying manner. Due to him hitting her, this triggered the Big Daddy's bond with the young girls to become protective, and drove him to impale Suchong with its drill.[11][23]

Suchong's body was found at the clinic by Sullivan, Ryan's chief of security during the Rapture Civil War.[24] Yet, due to the chaos of the conflict and hostility encountered in Apollo Square, no effort was made to remove the body. After Suchong's death, Gilbert Alexander, another influential scientist from Fontaine Futuristics, was put in charge of the Protector Program.[25] It was then that the pheromone method of bonding was discovered.[26]

As Jack makes his way through Rapture, he comes across various examples of the doctor's handiwork. In the Kure-All, he sees the grisly outcome of the Enrage Plasmid testing. While traveling through Olympus Heights and Apollo Square to find samples of Lot 192 so as to remove Frank Fontaine's control over his mind, he will arrive at his apartment and his Free Clinic. In the latter location, Jack will find Suchong's corpse still pinned to a desk by a drill, with his final Audio Diary lying nearby.

Suchong is mentioned by his former colleague Gilbert Alexander in the Audio Diaries: "Improving on Suchong's Work" and "The Pair Bond Mechanism". He is also pictured in the "Rapture Best and Brightest - 1952" poster.

While not referred by name, Suchong is mentioned by Jeremiah Fink in the Voxophone "Out of the Thin Air", having observed Suchong through one of the many Tears emerging around the flying city his brother Albert had told him about.

Suchong's voice is heard once again through a series of Audio Diaries made three months earlier to the events of Burial at Sea, related to his observations on a new kind of phenomenon and his own fate after Frank Fontaine's demise on September 12, 1958.

After Suchong and Fink's mutual theft of each other's research, the two eventually began to communicate and pooled their resources on several scientific collaborations. Despite their mutual contempt for one another, their partnership resulted in technology for the Vita-Chamber, the development of several Plasmids (some with little practical application), and various attempts at mental conditioning. Eventually, they ceased communion entirely.

Elizabeth visits Suchong's impromptu lab in the Silver Fin Restaurant at Fontaine's Housewares building to use the Lutece Device in order to retrieve a Lutece Particle and raise the sunken structure up to Rapture. While exiting the lab to retrieve the materials needed to fix the vandalized device, she triggers an alarm, alerting Suchong to her presence. Suchong spares Elizabeth when she offers to fix his device. She does so, enters Columbia, and collects the item, but upon trying to return, Suchong refuses to reopen the Tear. He instructs her to retrieve a hair sample from Jeremiah Fink's research lab. Once she does so, he reopens the Tear and lets her return to Rapture, only for her to be interrupted by Andrew Ryan, who explains that the deal Suchong made with her was not one he was at liberty to make, with the implication that Suchong made the deal without consulting him first.

Two weeks later, Elizabeth goes to his clinic in an attempt to find the "Ace in the Hole" for Atlas to exchange for the girl Sally. Elizabeth stumbles upon Dr. Suchong in his clinic, recording an audio diary while two Little Sisters, Masha Lutz and Leta, are trying to get his attention. When Suchong smacks Leta for pestering him, her cries summons the Bouncer with whom they have just bonded, which was an outcome Suchong had not expected. The Bouncer then proceeds to pin Dr. Suchong to the desk with his drill, which disconnects as the Bouncer pulls his arm free.

Yi Suchong was the embodiment of a scientist "unbound by petty morality". He did not care who his employer was or what their motivations were, so long as he was paid handsomely for his services.[13][19] Although his concern was always how he himself could benefit financially from his research, his alternative motivation seems to have been scientific advancement, regardless of collateral damage. Even the deaths of his patients provided valuable insight: after the clinical trials for Telekinesis showed it was possible to stop a bullet in mid-air if not for slow human reaction times, Suchong was inspired to create the Sports Boost plasmid. As a result, he was perfectly willing to collaborate with the invading Japanese Army, regardless of the consequences of his actions. This indifference later extended to his treatment of the Little Sisters. Unlike Tenenbaum, who would later show remorse for her actions,[27] Suchong always viewed the Little Sisters as tools to keep Rapture alive and little else, ignoring the remnants of their humanity completely. He also displayed signs of egomania, for instance, using his own birthday as a door code.[3] Unfortunately, his overconfidence and lack of empathy to human life proved to be his undoing, along with his temper, as after smacking one of the Little Sisters in a fit of rage, he was caught off-guard by a Big Daddy and brutally killed,[11] unaware that Elizabeth had discovered the bonding process moments earlier. As evidenced by his announcements addressed to her in Burial at Sea, Suchong is also abrasive. 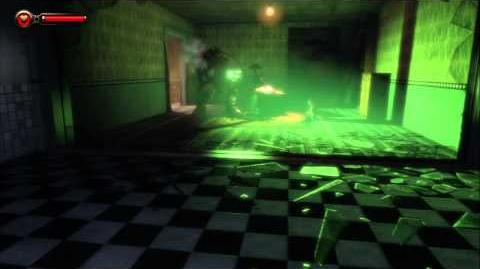 Newspaper article about the work of Yi Suchong.

Suchong making a deal with Elizabeth. 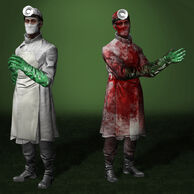 Render of Suchong's character model, before and after death.

Suchong's Poster in the Ryan the Lion Preparatory Academy.

BioShock-themed real-world stickers, featuring Yi Suchong above the Big Daddy on the right, next to Sander Cohen.’”